An up and down weekend

Thanks so much for all your suggestions on how to improve my not-so-precious-any-more quilt. So far I've ripped it in half and sewn it together differently and replaced 2 of the squares that bothered me most. There's still a bit of ripping and sewing to go, but I'm taking a break from it for now.

So far this weekend has been very up and down. I usually work on a Saturday but I had the day off yesterday. I decided to pop to my Local quilt shop to buy some basting spray, so I could get the I Spy Snowball quilt basted and hopefully quilted and handed over to Project Linus sometime soon. I discovered there was a sale at the quilt shop and decided I would have a quick rummage.


I had to rush back home because Murphy had been quite sick and had an appointment at the vet. A quick trip to the vet rapidly turned into x-rays and emergency surgery to remove a hair clasp, a stone and part of my poor little puppy's colon :(
He's back home again and needs round the clock monitoring. Now he looks like this 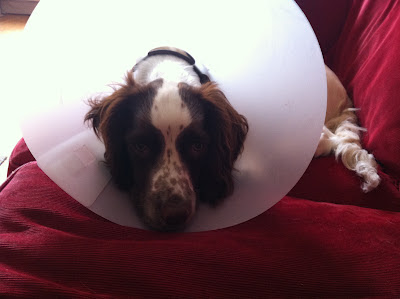 While he was in theatre I decided to do something positive instead of worrying myself sick. I managed to get the I Spy Snowballs quilt basted and quilted! I got the binding stitched down during the night, while I was sitting with Murphy. Here's a little sneak peek, and I'll show it off properly next week. I think it might be my favourite quilt ever!
So it's been up, down and up again so far. I'm hoping for peace and relaxation for what's left of the weekend!
Happy Sunday!
Fiona x
Posted by Fiona @ Poppy Makes at 06:54