I've finished the quilt top that I showed the other day. I can officially say that I love borders!!!! 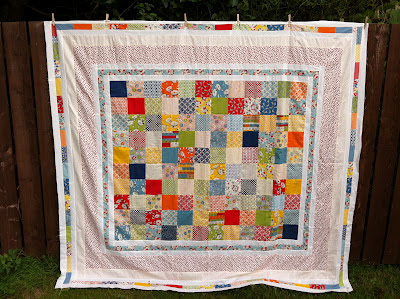 Here it is on my garden fence this morning. I had to stop adding borders because it's pretty big already at 76" x 84" and if it gets any bigger I can't lay it out anywhere in my house to get it ready for hand quilting. I'm itching to add some more, but I'm telling myself that some binding will finish off framing it nicely. I think it would look better if there was a bit more contrast between some of the borders, but I was using what I have. I'm thinking the hand quilting in strong coloured perle is the way to go.

After I posted the other day I saw this on Flickr, and that was the end of my no-more-quilt-alongs resolution. I had been resisting the Row Along by Lori Holt but after seeing a couple of rows in American Jane I was a lost cause! Two days later and I'm caught up :) 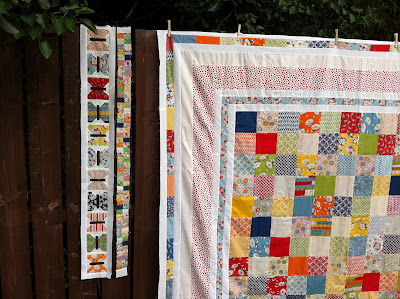 I decided that this was worth cutting into my little stack of Wee Play by American Jane (I didn't think I would EVER be able to do that!) 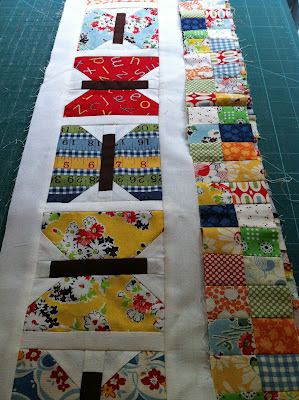 I think those butterflies are a whole new level of pretty!

Have a great weekend
Fiona x
Posted by Fiona @ Poppy Makes at 06:15

Email ThisBlogThis!Share to TwitterShare to FacebookShare to Pinterest
Labels: American Jane, Bee in my bonnet Row Along